As I mentioned elsewhere,
my 11 year old big screen TV decided it was tired, and wasn’t going work
any more. That, of course, accelerated my HDTV education and upgrade
timetable.

My replacement HDTV is on
order.

But as I mentioned to Kathy, this is a slippery slope. Programming.
Audio. Recording. Etc.

And so I found myself on the phone to DirecTV to upgrade our programming
to their HDTV package with their HDTV DVR. No problem, they said. They’d
be happy to take more of my money. No surprise really.

We scheduled an appointment for the upgrade, which includes a new
(bigger) dish and the DVR. I made note to the representative to make sure
to mention that a 30 foot ladder was going to be required, as the
existing dish was at the peak of one end of our house. No problem, they
said. 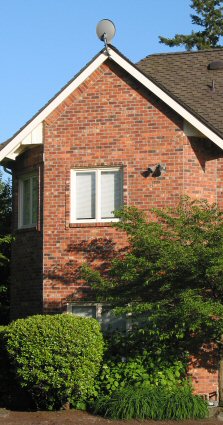 And there we sit as of this writing. Hopefully all will be accomplished on Friday. And if so, hopefully the briefly scheduled
Sunday morning visit will be removed from the books, or we could be up for a rude awakening.

To be fair, this all seems to be a organizational issue. DirecTV apparently has several contractors to whom they send this
work out and only one of them has ladders of sufficient length. Unfortunately work orders seem to get distributed without
regard to that. Everyone I’ve dealt with, on the phone or in person, has been great – and like me, somewhat bemused at the
situation.

It’s a good thing I’m not really in a hurry. Had I been on a deadline (like some specially scheduled HD event), I could see
being quite upset about all this.

Updates as they happen.

Update: DirecTV Take 5 (and a half) 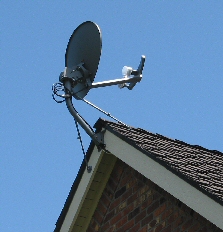 So Friday morning came and went. No DirecTV. I guess at this point I wasn’t terribly surprised. I figured that they’d be out
Sunday morning instead.

At around 1 I got a call from the technician – they were running late, and that they should be there after 2.

2:30 technician #1 showed up, after his Magellan nav system tried to send him through a closed fire gate about 1/4 mile from
our home (it’s about a 5 mile drive to make that last quarter mile). Technician #2 (the one with the ladder) was stuck in
traffic, but also eventually on his way.

Long story short, after much ladder climbing, attic walking, wire dropping, dish aligning and DVR configuring … we now have
HDTV. On my 27″ ViewSonic “temporary” TV. Just in time to watch the final episode of The Sopranos in HD.

The fifth time’s a charm. (Plus 1/2 for the delay into the afternoon.

But you know I’m not counting on it.

So I wait around all day for the TV to be delivered. Sometime between 2 and 6.

I call the delivery service’s number at 6:20 and got their answering service. The person was surprised, since they don’t make
residential deliveries on the weekend.

Oh really? Then why did they schedule me for a weekend?

This is getting old.

The TV was delivered.

So apparently not only do they make weekend residential deliveries, but late into the evening.

So this morning as I’m letting the dogs out what do I see? A DirecTV truck driving past. Notable, since we live in a small
community on a dead end road. Either that was my Sunday appointment that hadn’t been canceled, or a neighbor coincidentally
also had a DirecTV service call at 8:30 AM on a Sunday morning. Not sure I believe in coincidences, but for the record he
never actually did come to my house.

Given the “luck” we’ve had with this purchase, installation and delivery, I decided this morning to go ahead and move the new
TV into the family room and fire it up. If there was going to be a problem I wanted to find out sooner rather than later.

So, I unplugged the “temporary” TV and moved it back to the bedroom, wheeled in the new big screen (sitting on two dollys,
where it’ll stay until its table/stand arrives), and fired it up.

I’d recorded an episode of Battlestar Galactica in HD last night. Awesome. Star Trek Enterprise was on
while I was trying out the box. Beautiful. Even the golf that was on CBS HD was stunning.

There’s a lot of tweaking to be done, but that’ll wait until I’ve got it in its final position.

What I neglected to mention is that I’d ordered a matching base for the new TV, thought a different merchant. It was actually
shipped the day before the TV was shipped, though with the same carrier. As you might expect I was somewhat disappointed that
it wasn’t in the same 11PM shipment as the TV itself.

My plan remains to wait to “clean up the mess” until I can actually put the TV in it’s final location, on that stand. As a
result the family room is still a bit of a mess. The new TV sits on a dolly in front of the old TV, which itself was pulled
away from the wall for the original “it’s dead, Jim” diagnosis.

So, on Tuesday I’m about to call the carrier to ask about the stand when they call me first.

To schedule its delivery.

We’ll see. In the mean time, even in the wrong position on the floor, it’s still freakin’ gorgeous!

Oh, and a new sound system is on order as well.

The stand was delivered.

Saturday morning at around 10AM. Don’t they have an interesting definition of “between 2 and 6”? To their credit,
the driver called first and asked if it’d be ok. Seems he was 4 miles away on his way to a fairly distant delivery. He
figured he’d ask since if he did things in the other order my delivery would be very, very late.

So on Saturday I spent the day tearing down my old system and putting the new one in place. Lots of old components got moved
to the basement (including those old had-’em-since-highschool speakers), the old broken brick-that-was-a-tv got moved to the
entry way for now, and the new stand and TV got put into place.

Beautiful. But still running with the TV’s internal speakers.

Then on Tuesday the new receiver and DVD player arrived. Lots more unpacking and setting up and wiring and the like.

Even with temporary speakers, Lord of the Rings in 5.1 surround sounds wonderful. So does Animusic II. (I just
ordered a new copy of Animusic I, with the 5.1 surround audio that the original didn’t have.) Can’t wait for the “real”
speakers (including sub-woofer) to show up. Should be any day.

And then the Logitech remote. That might just be a marriage saver – four remotes is a little over the top. We’ll see.

15-Jun Update: And There Was Sound

The speakers arrived yesterday afternoon, so a quick hookup and … oh yes, much better than the TV speakers or the
temporaries. The subwoofer helps a ton. Still some tuning to do, but I’ll do that after I put the four corner speakers on
stands. Getting those is a road trip for tomorrow, I think.

In the mean time the Logitech arrived this morning. It’s charging in prep for configuration. I’m hoping and praying that
it’ll do the trick.

Figured it might be worth listing everything that’s gone into this little endeavor.

(You can also see the whole list here in the “Ask Leo! Store”.)

My thanks once again to Ara Derderian of The HDTV Podcast for his initial guidance, and
the recommendations on their highly informative site.