Inspired by a post by a former
colleague of mine I decided to grab the Canon (camera that is) and throw my
volley into the “show us your geek” competition.

This is what’s tacked up on a wall in a room in my basement: 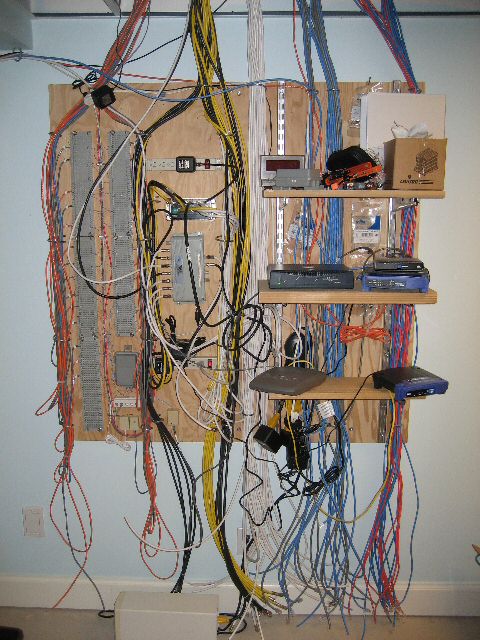 See, a couple of years ago I got really, really frustrated with the
wiring of the cable in our house. In a word, it sucked, big time. Think
splitter after splitter after splitter, so that at the end there was barely any
signal left at all. The end, of course, would be in the master bedroom where we
often watch TV.

They pulled the cable, and then I ran around and terminated everything –
building out these little doodads all over the house: 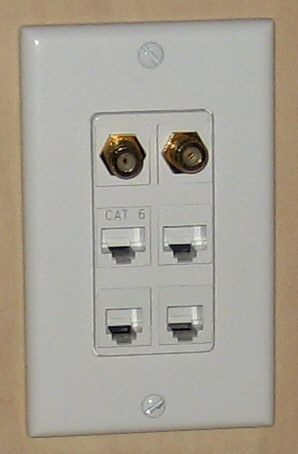 Many locations. 5 cables pop out of each. I think the installer mumbled something about “miles” of wire.

Which brings us back to that wall o’ wire in the first picture.

On the far left, where primarily orange and grey cables drop down from the
ceiling, is telephone. The grey blocks are traditional (and old) punch-down
blocks that you’ll find in wiring closets probably world-wide. Any phone line,
any jack, any time.

In the center-ish (ok, a tad to the left) with primarily yellow and black
cables coming in, are the coaxial cables for video. The grey box in the middle
is the splitter provided by DirectTV to split the incoming satellite signal out
to our receivers in a couple of different rooms.

On the right, it’s all about networking. The bundle of primarily blue cables
are the Cat-6 cables on which I primarily run any wired networking. The red and
blue to the right are the Cat-5e’s which I use in case I need to light up more
than one of the network sockets in any single location.

Top shelf: tools. Having the right tools to terminate networking and coax
makes ALL the difference. Yes, I make my own cables.

Middle shelf: the network. That’s a Netopia router taking my T-1 on the
left, and a Linksys broadband router, with a gigabit switch on top of it. (Only
a couple of my machines have gigabit capability, so I make sure to connect ’em
through that for talking to each other.)

Bottom shelf: my old, tired, DSL router and its broadband router. The DSL is
still hot, but it’s about to get turned off now that my T-1 is up and running
solidly.

And yes, that’s a UPS on the ground – the routers and the wireless access point
are all hooked up to it. (So’s the clock on the top shelf.) Should the power fail (as it does, about once a year), our
laptops remain on-line.

I know what you’re thinking.

You pity whomever buys this house from us.

I sorta do too. But there is documentation. On the top shelf – a binder with
a map, wiring diagrams and “what the hell was I thinking” explanation.

But it’s all so cool. In a very geeky sorta way.