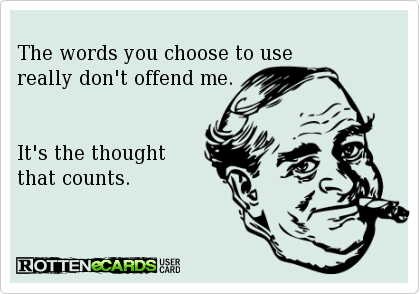 Over the last few weeks we’ve seen reports of another celebrity scandal where some high profile individual is losing their business, their connections and basically their reputation because of some words that they’ve used in the past.

Honestly, it’s not the words that matter.

I say that with some trepidation, because in a way they do kind of matter, but in a backwards way. For example there may be a high correlation between use of particular terms, and thinking particular thoughts.

But correlation is not proof.

Ultimately it’s not the words that matter.

It’s the thoughts behind them that count.

And, indeed, with this latest round of celebrity scandal I was originally shaking my head, very sorry to see someone getting publicly crucified for what I assumed was a poor choice of words or a miss-speak. If that were the case, if in fact it was a simple slip-up, then the shitstorm that resulted was entirely uncalled for. Apologies could be made (and were) and life could go on.

But then more information came out. Apparently this individual falls into that “high correlation” group I mentioned. Apparently there’s a pattern of actions and words that indicate that there’s a high probability that the celeb’s thoughts relating to the word used would, in fact, offend most reasonable people.

But more importantly, should we all be so scared that a word – a single word – we might utter in jest or in error would cost us our friends, business or reputation?

People make mistakes. It happens every day. That inappropriate use of language may not mean anything more than a trip of the tongue or the use of an outdated vernacular that simply doesn’t carry with it the same baggage that current use of that same term might. The thoughts being expressed might very well be completely acceptable.

It’s the thought that counts.

1 thought on “It’s the Thought that Counts”