At the risk of assuming anyone actually cares, here’s a peek into:

How it all began…

From late 1979 to 1983 I was working for a small company in Seattle writing software for a Z-80 based data entry terminal, and eventually a CP/M based computer. The problem was that they were small….and getting smaller. They were 25 people when I joined, and around 6 at beginning of 1983.

So, I took a chance, and responded to an ad in the Seattle Times: 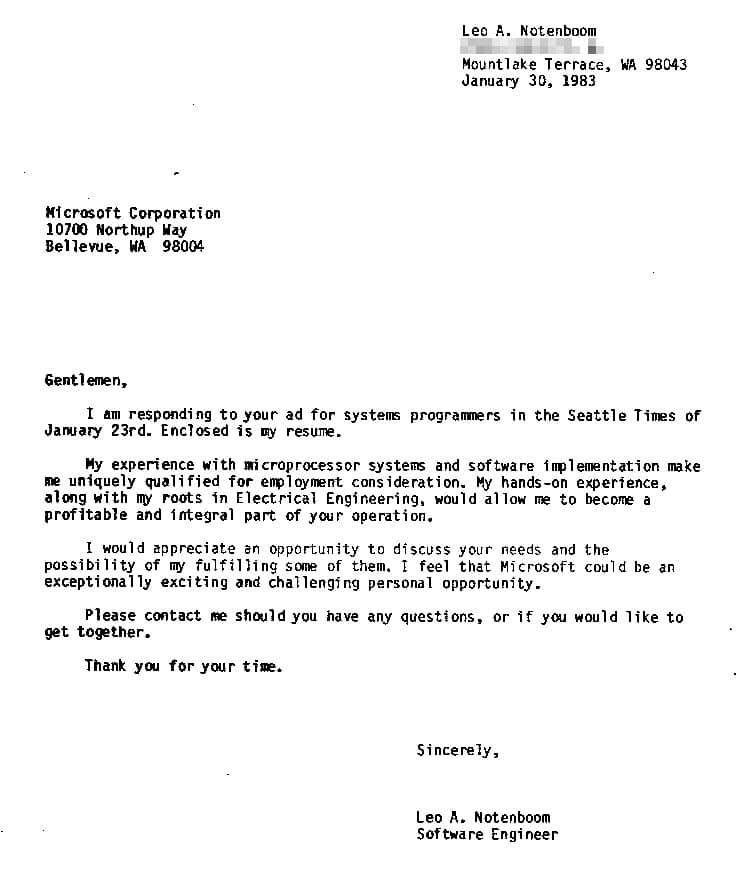 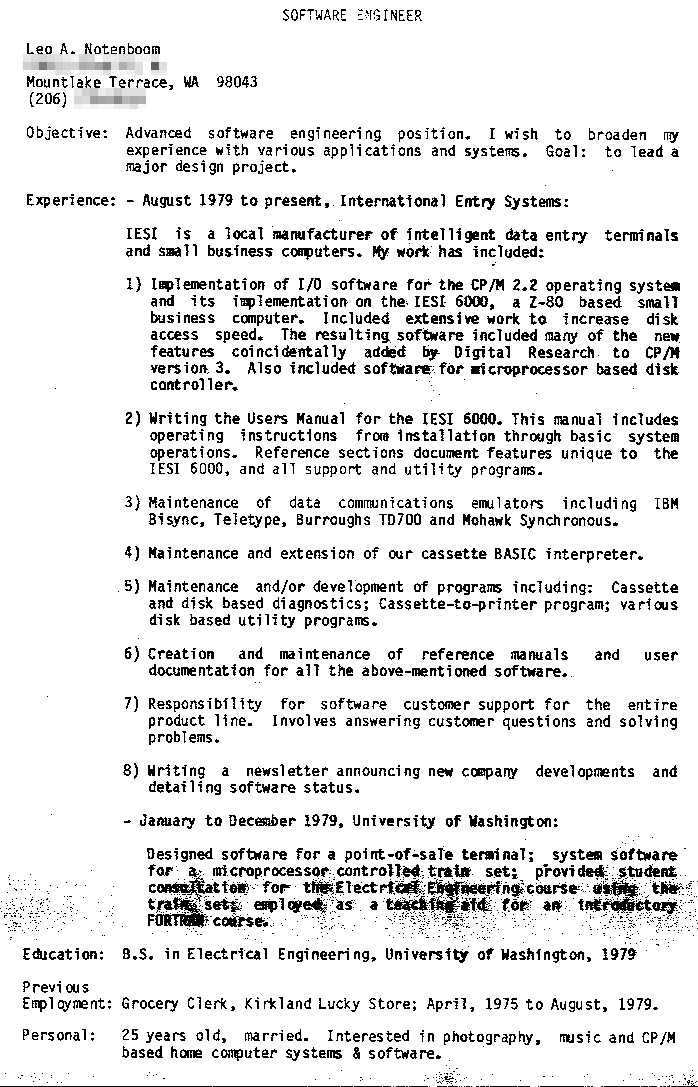 Interesting tidbit: that cassette Basic, listed above? My predecessor at IESI had reverse engineered it from a copy of Microsoft Basic at the time. The legalities had all been taken care of by the time I showed up. The predecessor? He left IESI just before I arrived in 1979 … to work for Microsoft.

At this point, realize that I wasn’t all that sure yet what I wanted to do. Being the loyal puppy that I am, leaving my job wasn’t exactly an easy decision for me, but I sent the letter anyway. After all, I thought, what’s the worst that could happen? I could be forced into making a decision if I got a response 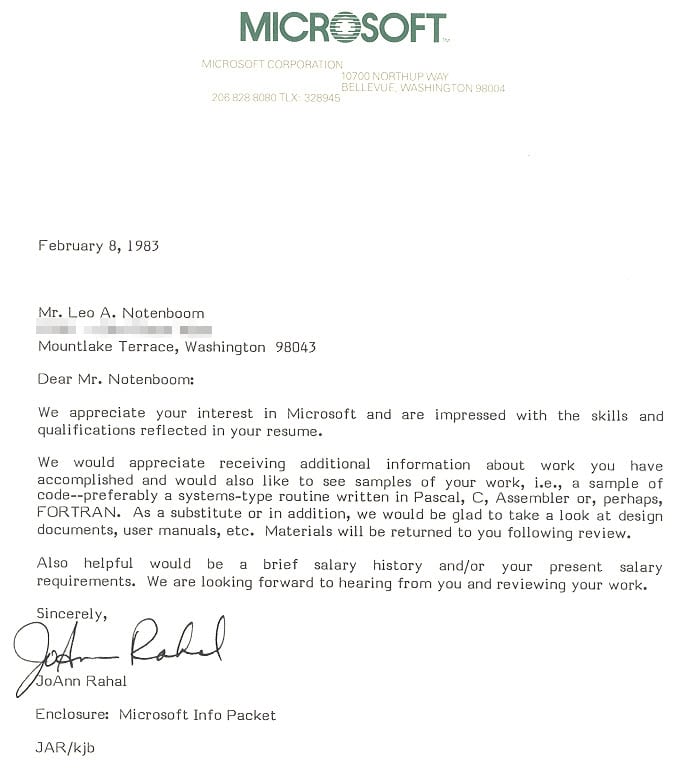 I responded with a two page letter elaborating on all my achievements and things I was proud of. I honestly don’t recall exactly what code I ended up showing them, though I’m certain it was mostly Z-80 assembly language (well commented, of course).

So I sent them good words and code. Again, I thought, at worst, I’d have to make another decision if I got a response… 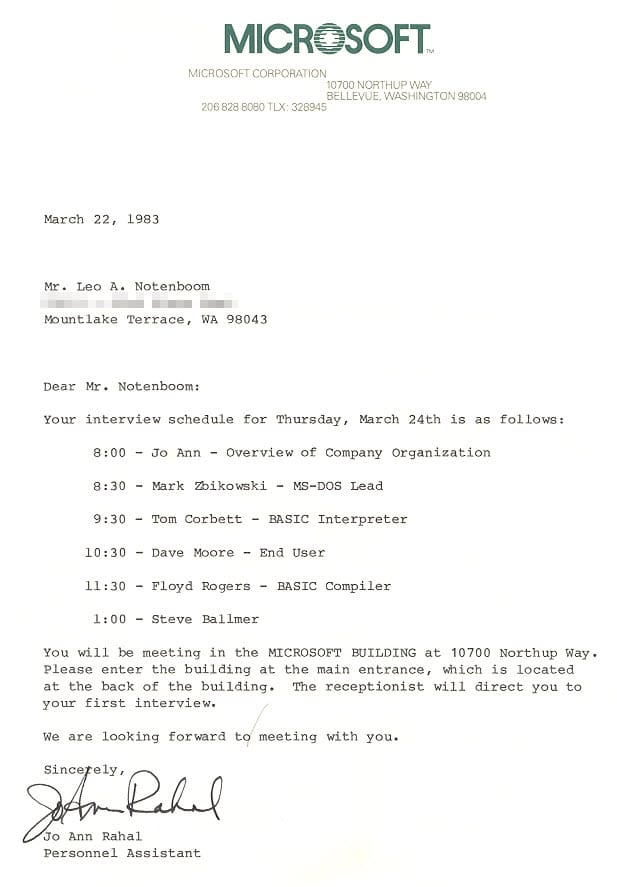 Zibo was the first interviewer. I remember him asking me questions for 45 minutes and then showing me a hot new computer, an Apple Lisa, for another 45. Of course that set the entire day late by 1/2 an hour.

Unfortunately, this guy I didn’t know, “Steve Ballmer“, was unavailable by the time I was back from lunch with Floyd, so I got sent home. As it turns out, they called me back for a second day of interviews. Steve was my last interview at the end of that one.

And I found myself faced with another decision…

Of course, Steve offered me less than I was currently making. I balked at that, and he quickly penciled in a number just above that. He also mentioned something about stock options, which I paid no attention to whatsoever. Silly me. In retrospect… well, you can guess. (Things I wish I had said: “Hey Steve, how ’bout half the salary and twice the options, ok?”)

So a few days later, in the mail: 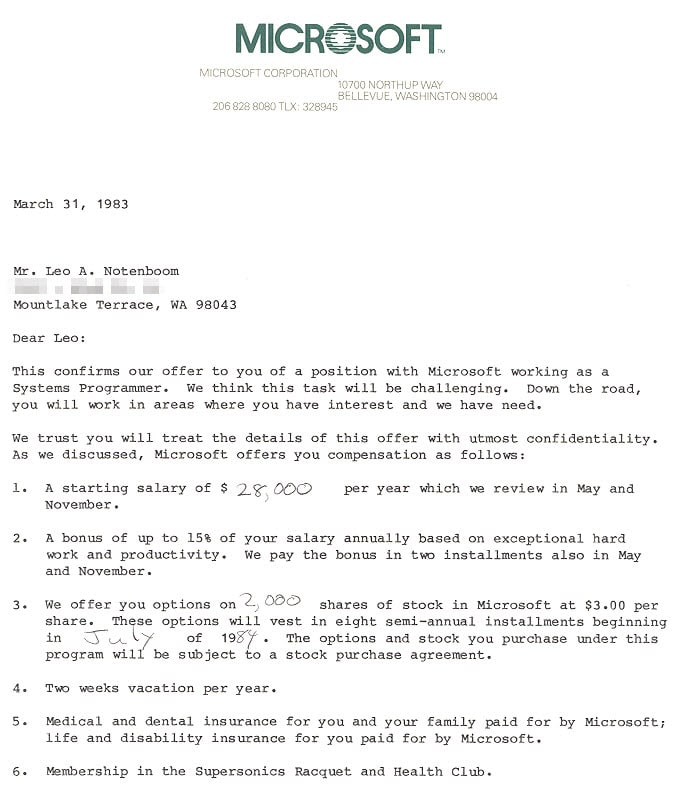 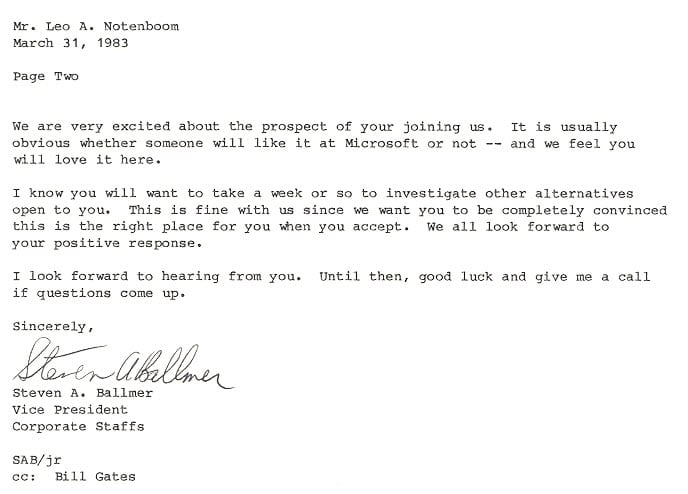 So there it was. My worst case scenario had come true. I had to make a decision.

In retrospect it looks like a no-brainer. In fact it probably was. But as I mentioned earlier, being young and perhaps a bit naive (as opposed to today, where I’m no longer young), it was a hard decision. But a decision it was and a decision I made.

And a few days later… 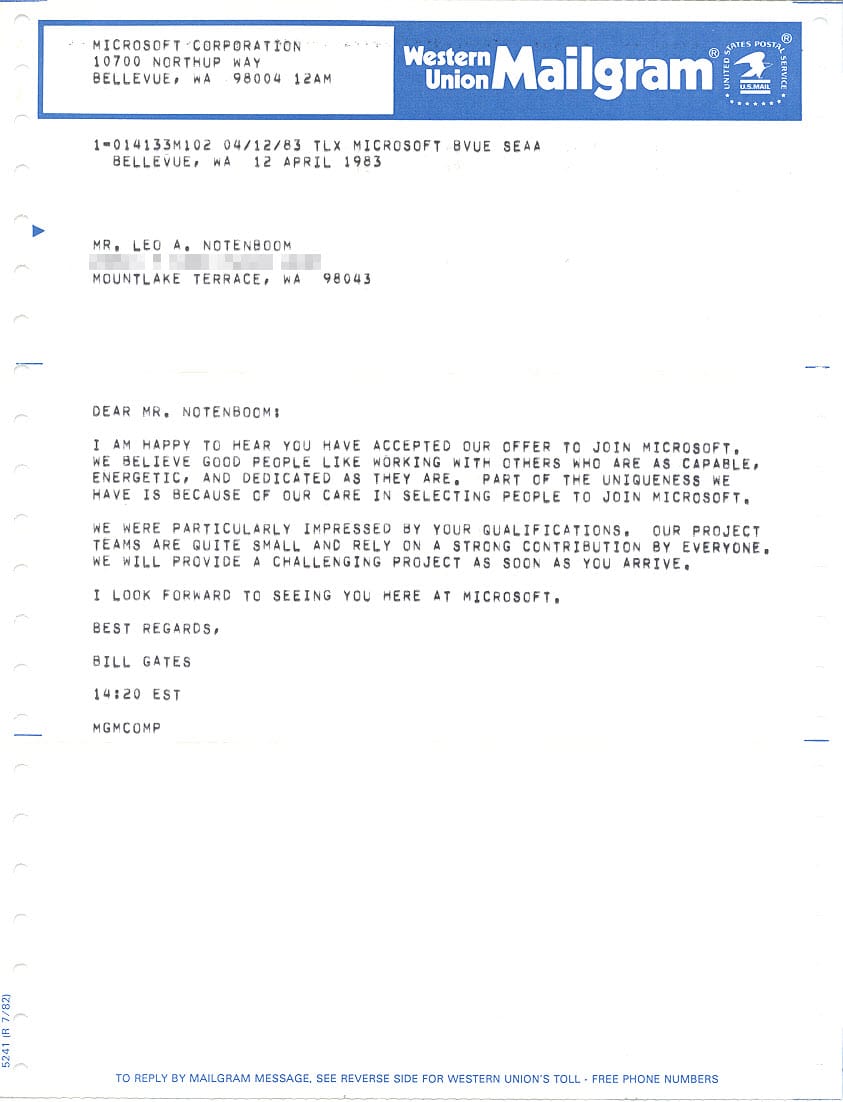 I have no idea if Bill really sent that, and to be honest, I hope he didn’t. Even then he had better things to do with his time.

For those that don’t “get it” (and it took me a long time), that scribble on the masthead is the letter “micro” followed by three of the letter “nu”. Yes, that’s Micro-nus. Micronews. See? We’ve always been geeks.

The company was small enough that acceptances were newsworthy:

Two things of note: One, I think I’ve outlasted everyone else in the list. Two, the person who was to become my Worst Boss Ever, truly Dilbert’s PHB incarnate, is on that list. No, I won’t name names, though friends of that era will recognize immediately.

The day approached, so finally… 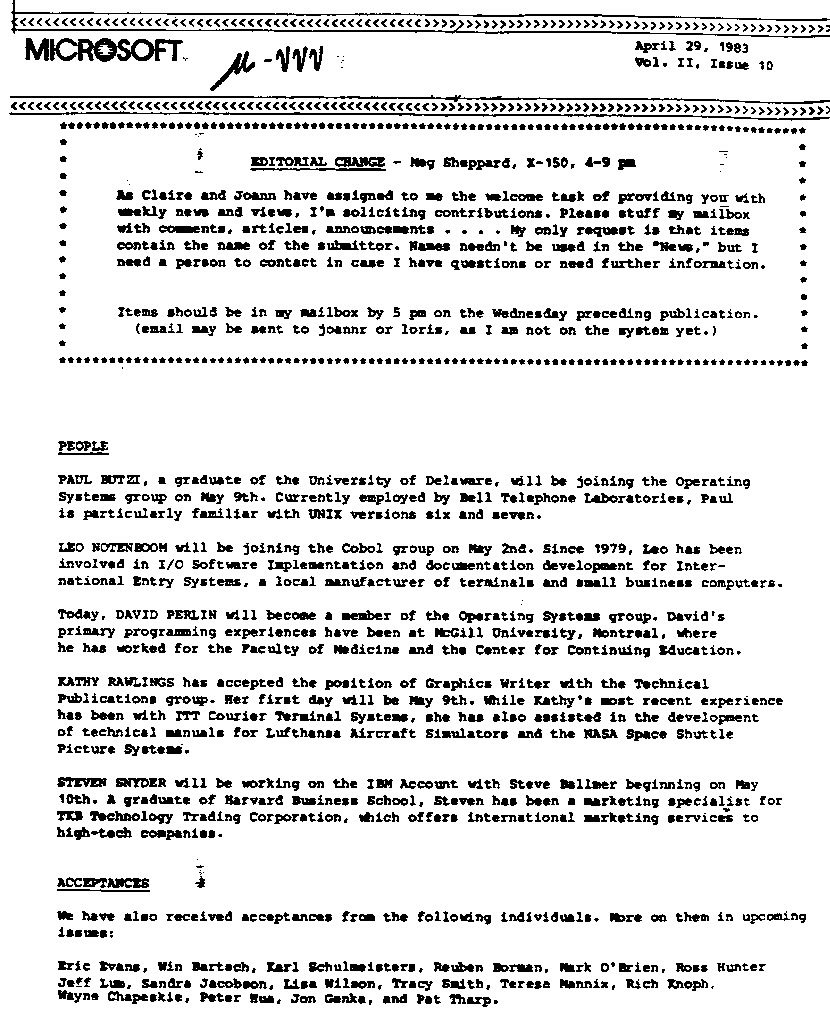 “New Employee Orientation”? No such thing. One half hour signing forms (yes, I have my original NDA, and no, you can’t see it), signing up for health insurance, etc. etc. and then here’s your office (the first of something like 30), your email name and your terminal. Oh, and here’s your manager (the first of over 20).

The 18.5 years that have followed…well, that’s a story for another day. But it’s been a grand story.

The End … sort of

Since November of 2000, I’d been working half time, and that half time opportunity was going away. I could choose between resuming full-time work, or leaving. Having “tasted freedom”, I choose to leave. As I say above, it wasn’t an easy decision, but it was a clear one. 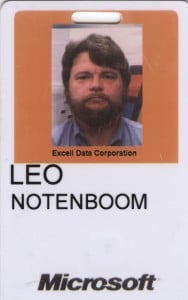 I did, indeed, return to Microsoft as a contractor in 2002.

Unfortunately as the health of my mother declined around that same time my contracting days ended up being fewer than I’d planned and I left after only a few months never to return. Not long thereafter I fell in with some internet entrepreneurs, and Ask Leo! followed in 2003.

But that’s a tale for another day…

4 thoughts on “How it began … and ended”