Back in 1999 I was in Microsoft’s Developer Division, the folks who bring you developer tools like Microsoft Visual Studio and the like.

Y2K was coming, but we weren’t particularly concerned. Most PC software would handle the “problem”, such as it was, just fine. It was really only older mainframe based software that really raised some concern, and that wasn’t something the Microsoft had ever dabbled in.

The closest we ever came to something similar was that we had compilers and such for the Cobol programming language, but had essentially abandoned those a decade earlier. (Though, on reflection I suppose I was probably the most knowledgeable person still in the company at the time who had worked on them. Should there have been an issue … gulp!)

No, Y2K wasn’t expected to be an issue, though of course many folks, myself included, were effectively “on call” when the clock rolled over to January 1, 2000.

One of the more interesting “we don’t think it’ll be a problem, but …” kind of scenarios was a gift given to all members of the developer division earlier in 1999: 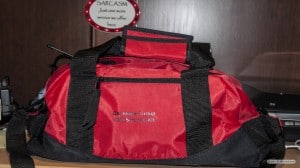 (Click the image for the full-size version.) In case you can’t read it, that’s the **Developer Group Y2K Survival Kit**. It was essentially an emergency kit with a blanket, first aid kit, water, a flashlight and a few other things.

You know, just in case.

So here it is 12 years later and I’m cleaning out a corner of the garage and stumble across this dusty, never used kit. Y2K wasn’t a problem, apparently.

However I am thinking of creating a “go bag” for my burgeoning HAM radio related emergency communications activities. As it turned out the bag washed up nicely, and if you look carefully you can see the tip of my hand-held radio peeking out of the upper left of the bag.

Might not be Y2K, but perhaps it’ll come in handy anyway.

Though I think I’ll pass on drinking the 12 year old water.