I credit a friend of the family, a TV repair man by trade, for setting in motion the sequence of events that would lead to my eventual career and subsequent success.

All this while I was somewhere between 9 and 16 years old.

Jim and his wife Tina were friends of my parents – Tina being of Dutch ancestry she’d become friends with my parents and of course Jim did as well.

We’d periodically go visit them in their house in Kirkland, and somehow I came to find out about Jim’s profession: a TV repair man for Sears – back in Sears more successful heyday. 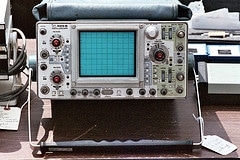 It was during those visits Jim did two things that became turning points for me:

That interest didn’t turn into a burning desire. Far from it. It was more of a “this could be interesting” moment.

One more immediate impact it had, though was the death and destruction of assorted electronics that came into my possession in the following years as I answered the question “I wonder what makes this tick?”. Most of them were surplus. 🙂

The real impact didn’t really happen until I found myself applying to Universities a few years later. On the application form at the time it, of course, asked for my desired major. I had no clue. It did, however, ask for areas of interest.

What came to mind? “Electronics”.

Now, this was before the days that the University of Washington had specific entrance tests and higher requirements for entry into specific colleges … so based merely on my interest they simply placed me in the College of Engineering on the road to a degree in Electrical Engineering.

At the start of the second quarter of my University experience I stumbled into of the prerequisite classes and my future became clear.

I’d never touched a computer before that day. I’ve hardly been away from them since.

All, in part, because a TV repair man took the time to share with a random pre-teen.

Makes me wonder … who’s life have you, or will you, impact in ways that you could never predict?

Or in ways you’ll never know?

2 thoughts on “The TV Repair Man”